On November 8, 2016, we Americans elected an openly racist and misogynistic white man to the Presidency. It seems that now more than ever, I return to this blog and start writing again. END_OF_DOCUMENT_TOKEN_TO_BE_REPLACED 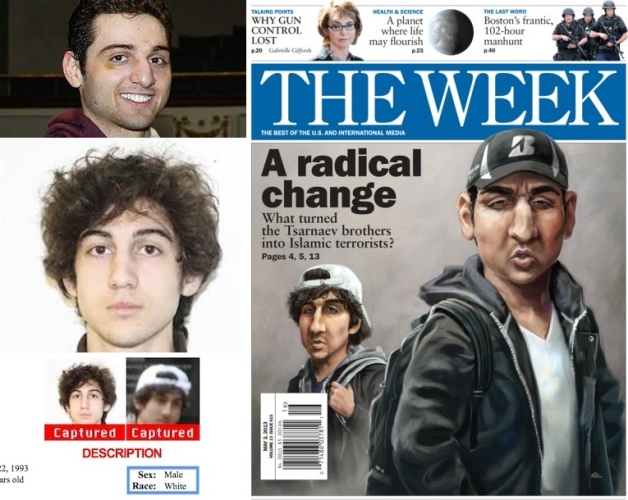 “Just so it is said, clearly and unambiguously: the Tsarnaev brothers are white guys. They are white. The FBI’s own wanted poster for Dzhokhar Tsarnaev lists his race as “white”, but you would never know it from the cover image on The Week.”

Pretty much says it all, brutally.

(via Dispatches from the Underclass)

Nevertheless, in America, a noisy chorus of pro-Apple bloggers keeps repeating the mantra about Android being cheap and crappy and second-rate, and people keep believing it and insisting that they must have an iPhone. American consumers have been told that those Android smartphones are hard to use, or complicated, or geeky, or unreliable, and, worst of all, on top of all that, they’re made for poor people.

And that’s where the rhetoric starts to border on something ugly. Look at what Apple fans were saying in April 2012 when Instagram became available on Android. Cult of Mac had a nice roundup which included sneering tweets about Walmart and “poor peasants” and “riff raff” and “poor people,” but also included these:

* “It’s like when all the ghetto people started coming to the nice suburbs. Instagram was our nice lil suburb.”

The italics are mine, and I’ve added them for a reason. Yes, it’s the dreaded G word, and it comes up again in a Dec. 13, 2011 article by Glenn Derene, who wrote that “Android’s Cheap, Low Quality Apps Make It Feel Like A Technological Ghetto.”

Thank you, Apple fans, for bringing Karl Rove tactics to the world of tech.

ReadWrite – Why Do Americans Hate Android And Love Apple?.

I don’t know about you, but I usually spend the autumn months parading around in my Navajo Hipster panties, feather headdress (on loan from model Karlie Kloss and singer Gwen Stefani), Manifest Destiny T-Shirt and knee-high fringed moccasins made in Taiwan while watching a Redskins game, smoking a pack of American Spirits, and eating genetically modified Butter Ball turkey, because I’m just that traditional.

Will they never learn..?

This morning, I encountered a brief post at ThinkProgress, “Conservative Pundits: Accepting Same-Sex Marriage is Common Sense.” The article relates remarks made by Mary Matalin and George Will on yesterday’s This Week with George Stephanopoulos to the effect that the popular politics surrounding marriage equality in the United States is trending inexorably towards widespread popular support for equality. The state-level victories for marriage equality in the 2012 elections, and public opinion charts like this one, tell the story.

The tenor of the ThinkProgress article is positive: it means to say “look, marriage equality and LGBTQ rights are obviously advancing when even Mary Matalin and George Will admit publicly that marriage equality is coming.”

But I am not so excited. This post inadvertently shows an ugly side to the politics of marriage equality, an ugly side others and I have feared would come. Read carefully what Mary Matalin actually…

From the same people who brought you White People Mourning Romney, comes another great tumblr. This one is bold, but it’s about time. It calls out the names and locations (and hilarious pictures) of the folks who spout off the racist shit you’ve been seeing on Twitter and Facebook since the re-election.

I’m a big believer in public shaming and most of these folks are just kids in high school who really don’t know any better, but they’re not going to learn any better from their parents, so let the public shaming begin!

I’m working on a post about what/how/why the Republican party should change itself whether you want to read it from me or not! Hopefully by next week. Until then, enjoy these gems.

Owldolatrous has a really good post about tolerance and perspective in the Gay Rights debate especially in light of folks being conservative Christians who feel they get ridiculed for being for “traditional marriage” while not, outright, hating gays.: · Aesop to the Right: Why I Believe Bristol Palin. In my opinion, like the race debate, this stems from a privilege the Majority has and its difficulty understanding that privilege when we’re all taught that everything should (and is!) equal.

The answer you must normally get from LGBT supporters like me—and it’s an answer that I normally give—is that trying to get our equality is not the same as trying to silence you. Tolerance is a two-way street and it doesn’t work if you’re passing laws that block one whole lane…

Good article over at Gawker relating the show Girls I posted about earlier. My fave bits:

It’s a failing of contemporary American culture that if there’s ever a discussion about adding a black character to a show, people immediately think that means a slang-spitting, wise-cracking stereotype. They assume the person asking for diversity is asking for the show’s creator to change the entire dynamic of the program. Instead, what’s more often happening is that the person interested in diversity is simply asking for the show’s creator to understand that black people can and do do everything white people do, usually making a character’s race irrelevant.

When he won the Pulitzer this year for criticism, the Boston Globe‘s Wesley Morris owed part of his victory to his writing about the Fast and Furious film series. Though the Fast movies are almost universally mocked as obnoxious pieces of shit, Morris calls them “incredibly important” for their depictions of race. “[U]nlike most movies that feature actors of different races, the mixing is neither superficial nor topical,” Morris wrote of Fast Five. “It has been increasingly thorough as the series goes on—and mostly unacknowledged. That this should seem so strange, so rare, merely underscores how far Hollywood has drifted from the rest of culture.”

I’ve also noticed this about the Fast series and glad it got a mentioned here. My Masters thesis was on the depiction of Asian Americans in American film and televisions so this issues is obviously close to me and I’m glad to see if getting some traction by the media…